It occurs to me that I haven't been posting here very much (or really, at all). I'm still maintaining this blog, but I imagine that, if you're looking for Ian updates and commentary, you'd be better served checking the blog on my eponymous web site, www.IanRandalStrock.com (for actual blog-type posts) or my personal page on Facebook (for briefer, more frequent comments on life and the world).
This weekend is Arisia, one of my favorite annual conventions (it's the really big one in Boston). I've posted my schedule (including the party I'm hosting) on my blog. Hope to see some of you there!
A look back on the year through the books I read (but did not edit): on my web site.
The headline is a little provocative, but the article does bear it out. An interesting take on finance abroad: Venezuela's currency value depends largely on one guy at an Alabama Home Depot.
This weekend, I'll be in Cherry Hill, New Jersey, for the latest iteration of Philcon. As per usual, I'll be spending the daylight hours tethered to the Fantastic Books table in the dealers' room. But if you'll be there, you'll also be able to catch me on a few programming items: Friday at 11pm in Crystal Ballroom Two, it's "Eye of Argon Interactive" with Michael A Ventrella, Peter Prellwitz, Hildy Silverman, and Bethlynne Prellwitz. Saturday at noon in Plaza Two is the panel "What To Do When Real Science Outpaces Your Current SF Project" with John Skylar, Phil Giunta, Mike McPhail, Jane Fancher, and David Walton. Saturday at 11pm in Crystal Ballroom Two (again) will be "Whose Line Is It, Anyway?" with Peter Prellwitz, Hildy Silverman, Tee Morris, and Michael A. Ventrella. Hope to see some of you there!
A quick visit to Theodore Roosevelt's Long Island resort leads to the happy discovery of my book on the shelves: see the blog post on my personal site.
Tonight, ABC Television is debuting a new series called Designated Survivor, apparently about what happens when the President, Vice President, most of the Cabinet, and Congress die during a State of the Union address, and how the one Cabinet member who stayed home as the “designated survivor” becomes the President. I’ll be watching, because I’m fascinated by the White House and the Presidency, although I wonder what they can do to differentiate it from The West Wing beyond the first few episodes, if they’re planning to make it an open-ended series.

Tom Clancy explored a similar scenario in his Jack Ryan series (the book Executive Orders, published in 1996), and Irving Wallace looked into it from a racial point of view in The Man (published in 1964).

The Presidential order of succession—beyond the Vice President—has been frequently discussed, and several laws have been adopted, switching around the order over the decades, although none of them have ever had to be put into use. Nevertheless, it is an interesting topic for fiction to explore. And if you’re looking for more on the factual side (what is the designated survivor, how did it come to be, and who has been that person who was one terrorist attack from the Oval Office?), check out chapters 72-77 in my newest book Ranking the Vice Presidents (specifically, chapter 77 is titled “Designated Survivor”).
In November 2014, Tanith Lee wrote this dedication for her collection Dancing Through the Fire (which Fantastic Books published in September 2015): "To Philae—and her Mother-Ship, Rosetta—Who danced through the fire, the ice, the dust and the shadow, to bring about the first landing… On a Comet."

Today's Astronomy Picture of the Day has something to say about that. 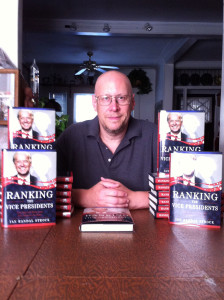 With all the hoopla surrounding Hillary Clinton's historic nomination for the Presidency of the United States, it's important to remember that her "first" comes with a caveat: she's the first female nominee for President from one of the two major parties. But long before she broke that glass ceiling, Victoria Claflin Woodhull broke the gender barrier. In 1872—75 years before Hillary Clinton was born—Victoria Woodhull won the nomination of the Equal Rights Party (who also nominated Frederick Douglass for Vice President). She came to national prominence through a series of lectures and writings on the United States government: what it was and what she believed it ought to be. She collected much of that thinking into the volume The Origins, Tendencies and Principles of Government.

And while she was waging her unsuccessful campaign for the Presidency, she was also part of the growing movement for female suffrage, which culminated in the adoption of the 19th Amendment in 1920. She was also a proponent of Free Love, freedom for women to choose how and with whom they'd live their lives, and even topics that were radical at the time, and today are simply expressions of equality.

In this newest year of the woman, Gray Rabbit Publications is proud to be publishing two volumes of Victoria Woodhull's ideas.

Victoria C. Woodhull: Ideas Ahead of Her Time (210 pages, $7.99, trade paperback, ISBN: 978-1-5154-0046-8) is a collection of essays on suffrage, government and society, collected together for the first time. Contents include: "A New Constitution for the United States of the World," "The Memorial of Victoria C. Woodhull to Congress," "Constitutional Equality," "A Lecture on Constitutional Equality," "Children—Their Rights and Privileges," "And The Truth Shall Make You Free," "The Elixir of Life, or, Why Do We Die?" and "The Garden of Eden, or, The Paradise Lost & Found."

Both books are available through all major online retailers, and to physical bookstores via special order through Ingram, which is the distributor of all Gray Rabbit titles.
Collapse